A special Hodson Bay Group company announcement was made at the Annual Employee Appreciation Night on Sunday, 9 February. The celebration took place at the Hodson Bay Hotel.

Hodson Bay Group Chairman, John O’Sullivan was delighted to announce that Garrett McGuinness, General Manager of Sheraton Athlone Hotel will be promoted to the position of Managing Director for the 4-star hotel in Athlone’s town centre.

Originating from Dublin, Garrett graduated from GMIT with a BA in Hotel and Catering Management. On leaving college, his first appointment was with Hodson Bay Group in 2001 at the Galway Bay Hotel, where over a five-year period, Garrett held several positions before progressing to Deputy General Manager. After leaving Galway Bay Hotel, Garrett returned to Hodson Bay Group and Sheraton Athlone Hotel as General Manager in 2016 before confirmation of his promotion to Managing Director on Sunday night last.

Congratulating Garrett, John said “With Garrett as General Manager since 2016, the Sheraton Athlone Hotel has been in a pair of very capable hands. He has really made the hotel his own and I am delighted to announce his appointment to Managing Director”.

Garrett acknowledged and thanked his team and colleagues across the Hodson Bay Group – “It’s a great group and that’s because of the people. I look forward to continue working with each and every one of you”. 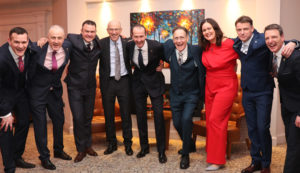